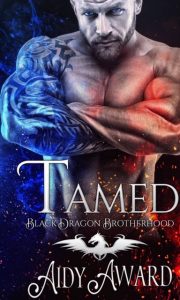 He has a darkness in his soul that he doesn’t know if he can contain. She’s smart as hell, or maybe she’s actually from Hell.

Neo can’t lead the Black Dragon Brotherhood in their fight against evil if he can’t get back to their headquarters in Rogue with news of the newest threat from Hell – shadow demons.
His best bet is the luscious, curvy fire witch who doesn’t seem to know how to use her powers, but has the tainted human lawmen running in circles with her sexy-as-hell smarts.
When her powers surface and bring the shadow demons and their human minions down around them in force, he must choose.
Save his one true love, his fated mate, the woman who can redeem his own soul, or save the world.

Pre-order the first book in an explosive new series from the author of Dragons Love Curves to get your fun action-adventure curvy girl and dragon shifter romance fix!

*Part of this story were previously published as A Touch of Fate. This new full-length novel version re-imagines the Fated For Curves series with dragons as the heroes.
For more about the alternate universe books in the Fated for Curves series – click here

Available now on Amazon and in Kindle Unlimited And Audible! 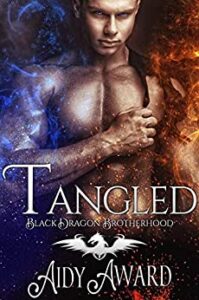 Save the Super-Smart Curvy Girl or Save the World?

Ace and the Black Dragon Brotherhood need help to fight the shadow warriors who have been stealing souls and turning them into an unstoppable army of destruction. Since he can’t use his power over the elements, he wants a new weapon and he knows exactly how to get one.
Kidnapping a scientist working for the Cult of the Dead and coercing her into making one for them is risky.
Nothing he can’t handle, until both he and his mission get hard. The curvy, lick-worthy scientist turns out to be both a witch with erratic powers and his fated mate. She’s both his enemy and the love of his life.

When the shadow army attack, he may have to sacrifice his own dark soul to save hers… and the entire Black Dragon Brotherhood.

Grab Tangled now and continue the adventures of the Black Dragon Brotherhood.

*Portions of this story were previously published as A Tangled Fate, which is now an alternate universe story where Aidy imagines, what if there was no such thing as dragons.
This new reimaged version has been expanded to tell the tale of the dragons and their curvy mates for everyone to enjoy! 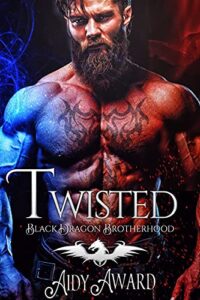 He’s found his fated mate, and she is his enemy~
Tia, hates everything she has become.
She’s nothing more than a tool for the mysterious Cult known as OWL and their greedy plans to spread chaos throughout the world. She’s ready to end it all but can’t when the shining soul of her dragon-shifter true mate brings a new light and purpose into her life.
But he’s too late for her to escape her fate.

Trip is the Black Dragon Brotherhood’s deadliest weapon and he’s been sent to take out the only thing standing between good and evil. Except fate has played a cruel trick on him.
The witch he must capture and kill to save the souls of every supernatural being in the the shadow demon’s path, is his one true mate. He knows the only choice is to destroy her soul and his own in the process if he wants to save everyone else’s including his own brethren.
Fate sucks and true love is even worse.

*portions of this book were previously published as A Twist of Fate, but has been expanded and pulled into Aidy’s world where dragons do exist and curvy girls get happy ever afters with the hot guys!