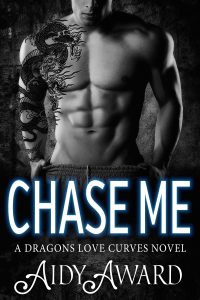 She’s stolen a priceless relic from his treasure, and his heart.

Ciara is the best damn wedding planner this side of anywhere, but she’s no thief.
That’s exactly what the sexy-ass dragon shifter has accused her of – stealing his treasure.
She’s going to steal something of his alright, his sanity, if he doesn’t let her go so she can get back to giving couples their happy ever afters.
Its the best way to ignore the fact she’s sure she’ll never get one her own.
Not with any man, or even a dragon.

Jakob is either going to kill the sexy, curvy woman who denies she has The First Dragon’s relic, or take her to bed and drive her as crazy as she’s making him.
Why does he want her so much he can’t even properly interrogate her?
Might have something to do with the way his soul is screaming at him to mark her, claim her, f*ck her, and make dragon babies with her.

He can’t give her his soul if she’s already stolen it, or something darker and more dangerous has. 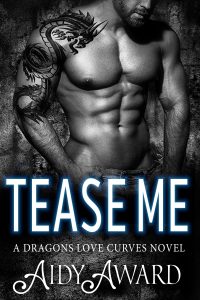 Fulfill a destiny, save the world– and the soul of her mate.

Fleur Anthousai, a curvy earth witch, has known since birth that she has a destiny to fulfill. Too bad nobody told her what it was. She hopes her friends, the Wolfe pack of Blue Creek, might have finally pointed her in the right direction when she’s invited to the multi-pack scenting ceremony. Surely, becoming a wolf mate will set her on the path to understanding her own prophecy.

Steele Zeleny is a green warrior dragon and he’s damn good at protecting the world from the darkness that is the demon dragons, all while romancing the pants off any and all the ladies. All bets are off when a shard of his soul demands that the curviest, sexiest little flower of a witch is his true mate.

Fleur’s destiny and Steele’s soul are more important to the fate of the world than either of them know. 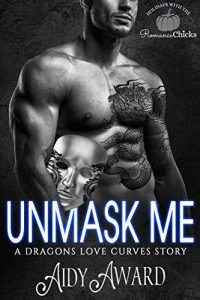 Ciara is still adjusting to her new life as a witch, a dragon’s mate, and living in a new country. What she needs is a project to make her new home feel… like home. A party to plan is just the ticket! Not just a party, but a masquerade ball where more of the green dragons can find mates. Perfect. Except no one does Halloween like back home in the US, she can’t find decorations, or costumes, or even pumpkins. Boo!

Jakob loves his mate something fierce and he’ll do anything to make her happy, even if that means talking the biggest baddest dragons around into dressing up in silly costumes. But are dragons and humans the only ones coming to this party?

Grab this fun-sized holiday romance and check out the other books in the Holidays With the Romance Chicks series today! 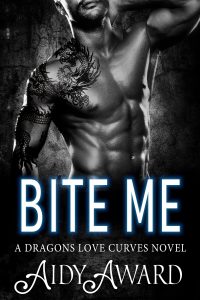 She’s stolen a soul… and his heart.

Ky Puru is the best chance anyone has to get the soul of the Golden Dragon Wyvern back. Nothing will stand in his way – not demons, not witches, not even the king of hell himself. There’s only one problem. Jada, the thief, is a succubus…and his true mate.

Jada needs to get away from her coven and find a life she can call her own. If it involves baked goods instead of blood, that would be great. But, that’s not going to happen, and this sexy dragon warrior that wants to claim her as his mate is the reason why.

Neither Ky nor Jada ever thought they would have a true mate, and they may not get that chance when an evil foe attacks and will do everything he can to make sure no dragon ever gets to find their fated mate or fall in love.

This dragon alpha and his curvy succubus mate will have go to hell and back, literally, for their chance at their own happy ever after. 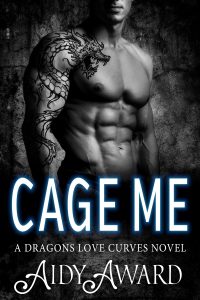 A flying dragon and a mermaid can fall in love, but first he has to convince her to return from hell.

Cage Gylden is one lucky son of a dragon. He should have died when his soul shard was stolen, but his mate saved his life.
Too bad he’s never met her…and she’s in hell.
As a warrior he will do everything in his power to defeat the Black Dragon and rescue her, whether she wants to be saved or not, even if he has to sacrifice his own life.

Everyone Azynsa loves gets hurt… or dies. She won’t allow herself to feel for those around her, not since her police officer father died and her mother’s people, the Mami Wata mermaids came for her. But, she will not allow anyone else to sacrifice for her, ever again.

Fated mates or not, these two are in for one hell of a time trying to save each other, and themselves. 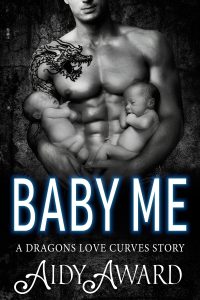 Azy’s called Cage home from the search for the kidnapped members of his Wyr because the buns she’s got in the oven have decided they don’t want to wait the full nine months and are growing at twice the normal rate. But, their impatience to get out into the world is making for a difficult pregnancy and Señora Boh, the mysteriously magical midwife, says the best way to keep them all happy, healthy, and safe is to strengthen their bonds and find the ring that proves she’s the true Wyvern mate.

Cage is obsessed with keeping Azy and their babies safe. Not even a pushy wedding planner, an all too familiar midwife, more flowers and donuts than any one dragon can possibly endure, or a hunt for a stupid piece of jewelry will mean anything if he loses her. He can’t do it alone.

These babies are going to throw not just Cage and Azy’s life into chaos, but change life for all of dragonkind. 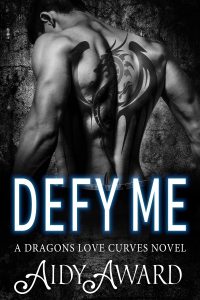 No soul. No Mate.

I know full well I don’t get to even feel love, much less fall in it.

No soul, no soulmate. Ever.

I don’t have room for stolen kisses and fantasies of of making her mine. I’ve got to break the curse on my brethren and take down the King of Hell.

So why is the dragon part of me insisting on marking and claiming this strange and beautiful woman who just walked into my life (and drank my beer)?

Really weird stuff is happening, like how I accidentally keep turning this hot guy into a dragon and how I really, really wants to kiss him. Again.

What am I thinking? Dark and broody bad boys with those kind of six-pack abs only want one thing, and they don’t want it from me and my big ole butt.

We’re stuck together until we can figure out how to break some crazy supernatural curse on me.

But what if I don’t want the curse broken? 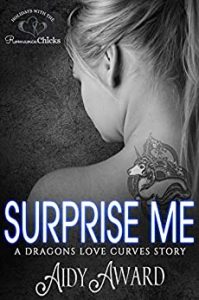 What happens when a Demon Dragon Warrior throws a Valentine’s Day surprise birthday party for his soulmate?
Glitter volcanos, a unicorn ice cream machine that poops rainbow sherbet, and an attack by the forces of evil.
Birthday parties are hell.

Jett doesn’t have any idea how old he or when he was born was thanks to Ereshkigal’s curse. He’s never even had a birthday, much less a party. Not a whole lot of celebrating in hell.
He couldn’t even imagine celebrating the passing of his years. He’d much rather mark the passing of time since he’d met Yvaine.
If anyone’s birthday should be celebrated it was that of his soulmate.
But Jett and the Dragon Warriors aren’t the only magical beings that want to show up to the party.
Nobody likes a forces-of-evil party crasher, especially when they’re trying to kidnap the birthday girl.

Read this fun-sized follow up story to DEFY ME today and be sure to check out the other Holidays with the Romance Chicks Valentine’s day books too! 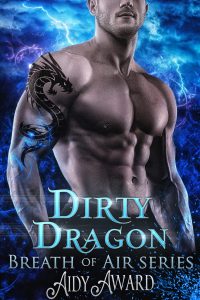 Strange Magic, a Curvy Witch, and a Dirty Dragon ~
Dax:
There’s something strange in this neighborhood.
Who ya gonna call?
Dragon Warriors!
It will be a piece of cake to keep the Troika Wolf Pack pups and their adorably cute nanny safe from the non-existent threat.
The Black Dragon isn’t interested in wolf cubs.
But I’m interested in sticking around to see if their nanny wants to have some fun. In my bed.

Jules:
Argh! The dragon warrior sent here to help me protect the pups is completely infuriating.
He’s great with the kids (which I wouldn’t have expected), and I want to kiss him until I can’t see straight (which is completely distracting.)
But I keep having visions of a mysterious figure who is trying to change everyone’s fate. She’s very powerful and is blocking my second sight so I can’t see enough to protect any of us.
Except when I’m with the dragon – then I see a future I’m even more scared of…
A very, very dirty future. Together.

Click here if you’d like to check out the first few chapters of Dirty Dragon in my rough-cut preview! 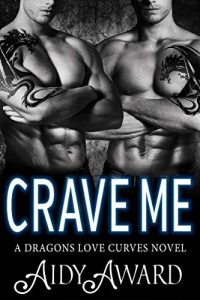 Portia has always been different than the other demons in her coven. She’s extra curvy, can slay Hell’s wyrms like a badass, and she’ll do anything to become a dragon’s mate. She’s known since she was young that the only way to fill the void inside is to find someone who truly loves her for herself and not her succubus allure. Just like the song says – she will do anything for love, but… she won’t do…nope, she’d even do that.

Zon and Gris never thought they’d be able to find a mate that could put the severed pieces of their shared soul back together and make them whole. Fate must be smoking something to light up their soul shards for the thieving succubus who almost killed their king. Yet they find themselves doing everything for the love of their sworn enemy.

But both Hell and the the First Vampire crave Portia and her powers too. The dark forces won’t be satisfied with anything less than making her the new Queen of the Underworld, a place no dragon can exist and remain sane. 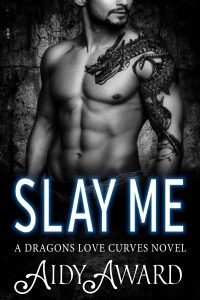 Read the grand finale in the Dragons Love Curves series today for action adventure, romance, and happy ever afters for curvy girls and their dragon shifters. 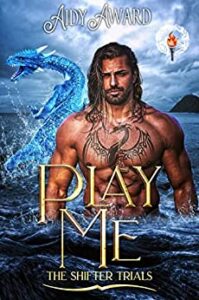 He was the Second Wyvern of the Blue Dragons, which meant he’d been chosen above all others for his prowess, his cunning, his fighting abilities, and that one special skill all Blue Dragon Warriors had, his ability to find anything.

He was the best.

Granny lost her favorite reading glasses? Taika could find it.

Little tyke lost his homework for school? Taika knew exactly where it was.

Missing car keys? Lost sunnies? Doggo gone walk-about? Taika was the one everyone called. He could find anything.

Except his one true mate. 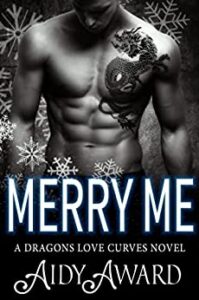 Dragons don’t get married – they mark, claim, and mate.
They don’t celebrate Christmas either …
So whose Holiday Wedding are all the Dragon Warriors invited to?

Already a fan of the Dragons Love Curves series?

I’ve got fun (and plus-sized!) merch for you over in the Amazeballs Store!