Aidy: See… A few years ago, I wrote a series about shifters from outer space fighting for their fated mates and their souls. I loved it and it was lots of fun, but because I was a new author, not very many people read it.

I decided to re-write the whole series and turn all the heroes into Dragon Warriors in my Black Dragon Brotherhood series. But I love these space bears so I’ve turned their stories into an alternate universe for readers where I imagined that dragons didn’t exists, but these curvy girls still needed soul mates.

Aidy: Yep, kind of. My two alternate universes won’t ever meet, that would be weird for the heroines. lol

Reader: So, it is Touch of Fate the same story as Tamed?

Aidy: Think of it like this: The heroine in each book is the same – Kady from book one, is the same heroine in both stories. She needs a soul mate, in one universe it’s a Dragon Warrior and they fight the Shadow. In the alternate universe, they fight the Spectrals. In both universes, they discover the power of soul magic, fall in love, and get happy ever afters.

Reader: Cool. Do I need to read both books?

Aidy: I mean… I think you should. lol

If sci-fi and bear-shifters is your jam, read Fated For Curves. If you want more Dragon Warriors because you lurrved the Dragons Love Curves series and never want it to end, then read The Black Dragon Brotherhood.

If you just can’t get enough curvy girls getting their happy ever afters with sexy alpha-shifters in an action adventure story – read them both!

Lions and Foxes and Bears, oh my. They’re all Space Marines who are fated to fall in love with curvy geek girls!

Save the Geek Girl, Save the World 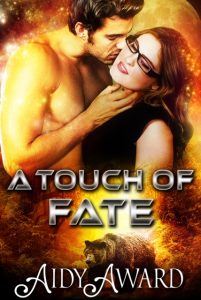 Kady Ayininkizi, your anything but average curvy geek girl, has isolated herself in her brand new tiny house in the mountains because she’s tired of being bullied by the alphaholes of the world.

The spaceship that crashes in her backyard brings the first alien she’s ever encountered, make that the sexiest alien, ever.

When he insists she help him get to some weird place called Magic, New Mexico, she is determined to outwit the men in black in spite of the growing attraction that she knows will never come to fruition.

Black Barrett can’t lead his elite team of shape-shifting Star Rangers on their mission to stop the scourge that is the spectral soul stealers if he can’t get to Magic, New Mexico.

His best bet is the luscious witch who doesn’t seem to know how to use her powers, but has earth’s lawmen running in circles with her sexy-as-hell smarts.

But, when her powers surface and bring the spectrals down around them in force, he must choose.

Save his one true love that the Fates have brought him, or save the universe.

Get a taste of A Touch of Fate in this excerpt!

Okay. Save the alien, save the world.

Kady glanced in the direction the emergency services were coming from and then into the burning trees. She didn’t have much time. It might work if the alien or aliens were conscious. Which would be a miracle.

She grabbed the flashlight from Herbie and headed into the hole in the trees.

“Please be a nice alien species here for first contact and not the point man in the alien invasion, because I don’t know any fighter pilots that look like Will Smith.”

The alien man groaned, or maybe growled. Oops. Had he heard that? Was he awake?

Another twenty yards and she could see him head to toe. And what a hell of a head, and toes, and muscled legs, and wide shoulders, holy cannolis, look at those abs.

If all aliens were built like this guy she volunteered to be Earth’s ambassador to his planet. Although she wouldn’t get any ambassadoring done because she’d be daydreaming all day and every night about all the dirty fun things she could do with a man like that.

Not that he’d be interested in her, but a girl could fantasize all she wanted.

He groan-growled again and one leg moved revealing more skin through the tears in his clothes. Plus, she swore she saw black fur.

Huh. A humanoid with body fur was plausible. Or maybe he just hadn’t manscaped properly.

She shined the flashlight across his body, mostly to figure out what his injuries might be and to see if she could figure out how to move him, and a little bit to see more of his, uh, fur.

Her light caught on some sort of pendant hanging from his neck. The cord was torn and ready to fall off. The stone looked like a large piece of amber, carved with a bear paw print.

A siren echoed off the mountain. They were getting closer.

No way she could help by standing here gawking at him. She took several tentative steps, and with each one, the medallion’s light grew brighter. Hopefully that was a good sign, like E.T.’s heartlight.

Try out a sample of the audiobook!