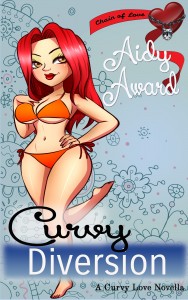 All the books are only $0.99 or FREE if you’re Kindle Unlimited!

Curvy girls deserve a vacation too!

Here’s a short excerpt to give you a taste.

Being able to add cover shots from the first ever all-bodies swimsuit edition of the men’s sports magazine would make the whole photoshoot more than worth it.

If they went with Grant’s proposal it meant much needed money and a major boost to my career. Which would be sweet. Plus body positivity in mainstream media? Hell, yeah. A reality check filled with red-eye flights, chilly hurricane weather, and seaweed up my bum. Priceless.

That is if Grant could sell it. If the board were giggly female models, no problem. But, he was payrolling this whole photoshoot on his own dime, it obviously meant a lot to him to make it work. Four models, half a dozen crew and the equipment alone had to run him at least twenty-five K. Plus, all the travel expenses. Even if we were only here for three nights.

I walked up the beach to the tent to wash off, warm up, and change my clothes. I rarely had jobs outside of a studio, and had never gotten the chance to go on a beach shoot, not that I’d get to do any sun bathing or anything. But having the butt-crack of dawn call gave me plenty of time to check out the seafood and a waterfall my fans on social media told me to visit. That is if the weather held.

The small freshwater shower the crew had set up rinsed off most of the grit, but salt and sand scratched me in places I didn’t even know existed. More came out when I peeled off the bikini top. I had half the beach in each cup. But the warm water slowly quieted the goosebumps.

“Danica,” a male voice with the lovely deep rumble of arousal came from behind me. Usually that was more than welcome. But with Grant?

Everyone and their mothers ran around naked or half-clothed on sets, but for some reason my hands still popped up to cover my breasts, which surprised the heck out of me. More men than I could count on my fingers and toes had seen me more than naked, and I certainly wasn’t a modest mouse.

He leaned against the tent pole and threw a camera bag over his shoulder. “The photographer showed me a couple of the shots and the red of your hair matches the sunrise perfectly. We couldn’t do better if it was photoshopped.”

I forgot to listen to what he said. This was the first I’d seen of him and I was too busy being hypnotized by the scruff on his dimpled chin. Wouldn’t that feel nice rubbing across my skin. He was one of those guys that got better looking with each year.

Plus, a man in a suit with his sleeves rolled up and his tie loosened had that ready for sex look I could never resist.

No no. Just friends. Always. It was probably the reason we’d been pals as long as we had. We’d missed the more-than-friends window a long time ago. Not that I wanted to be more than that with him. No. This was comfortable. But, just because we were friends didn’t mean I couldn’t appreciate his appeal.

Just for fun we all have a character in our books named Cameron. Can you find him? Tell us what kind of character Cameron is in the rafflecopter below.

You’ll get six chances to enter, one for each book.

We’ll draw winners on March 1, so you’ve got time to buy and read all the books.

Be sure to check out Sam Cheever’s blog on Feb 7th for the next title in the book chain and more chances to win.

Be sure to let me know how you like Dani and Grant’s novella. Kisses if you post your review on Amazon!